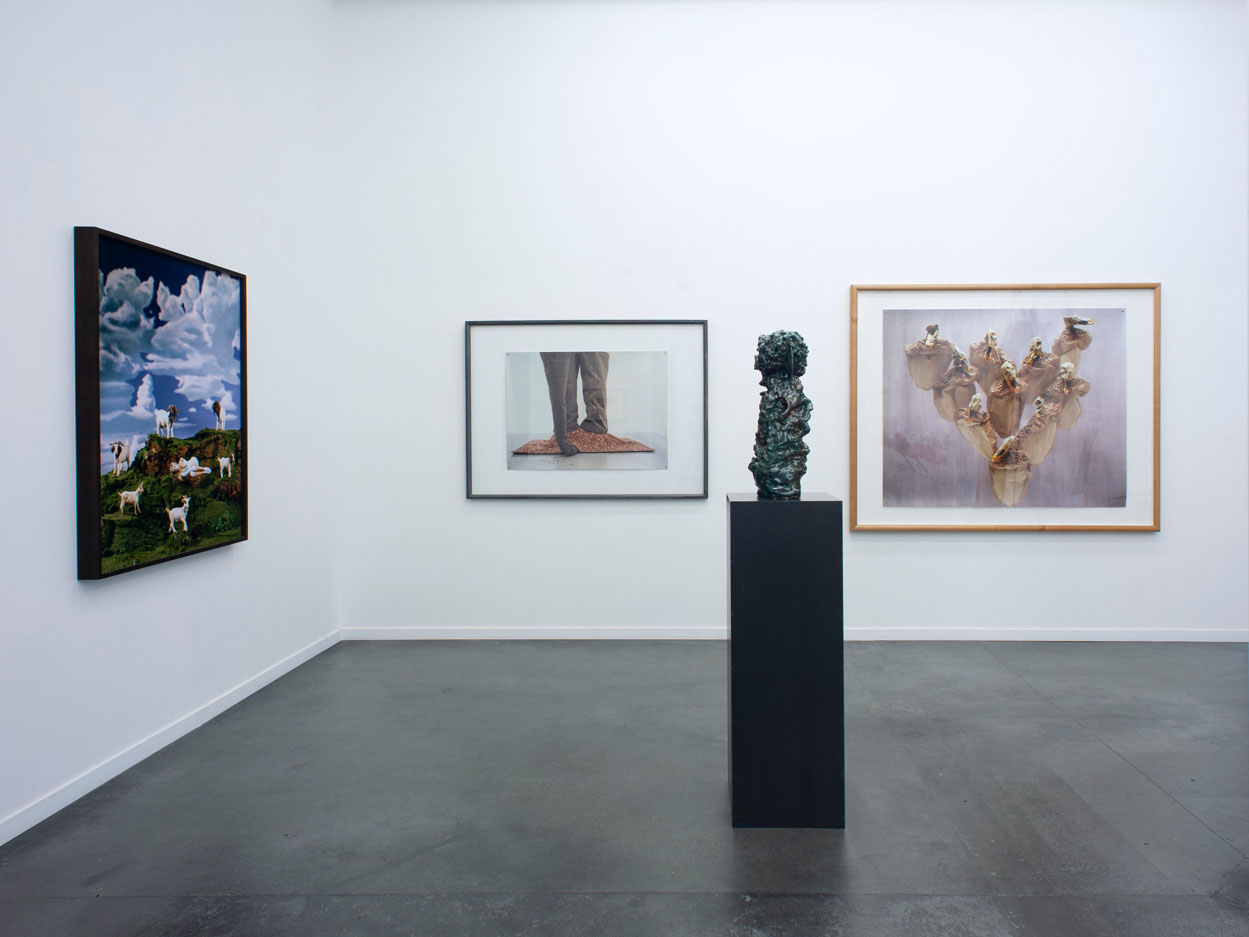 The Bernier/Eliades Gallery is pleased to announce the group show “Animal Farm” opening on Thursday 13th of January. On this occasion, the gallery has selected works by artists which evolves around the presence of animals and/or the concept of it. The group show is featuring sculptures, drawings, paintings, video and photography.

The practice of Cameron Jamie (USA) has a distinct place of its own in the contemporary art scene. Through a wide range of media: performance, video, sculpture, installation, photography and drawing, his work embodies an ongoing investigation into the unselfconscious folklore of suburban culture, exploring marginal realities, amateur and vernacular traditions and revealing a hidden face of our society.

The works of Dionisis Kavallieratos (Greece) resemble oversized distorted and reformed instances of his personal mythological universe with a humorous touch of a sharp irony. His meticulously crafted ceramic and wooden sculptures capsize history with erudite references ranging from comic books and Dante’s Inferno, to fairy-tales and Al- Qaeda alike.

Bharti Kher’s (U.K) practice encompasses digital photography, painting and sculptural works (made out of bindies, iron, bronze or resin cast). Her art has a range of meanings and connotations across historical and contemporary periods, exploring also her interest in kitsch and popular consumer culture.

Jonathan Meese (Tokyo) appeared on the international art scene back in 1998 and is now one of the contemporary art world’s most enigmatic, seductive and rebellious figures. He is renowned for his multi-faceted work, including wildly exuberant paintings that mix personal hieroglyphics and collage, installations, ecstatic performances, and a powerful body of sculptures in a variety of media. At the core of his work remains an unrelenting sense of history, based on intimate drawings, symbols and objects which form the mythological universe of his life’s work, drawing in the innocent by-stander almost by force.

Susan Rothenberg’s (USA) early works that came to prominence in the 1970s New York art world, were mainly large acrylic, figurative paintings of horses. Since the 1990s her works were mostly reflections of her move from New York to New Mexico. With the use of thickly layered and intense brushwork, her paintings acquire life and depict scenes from everyday life – either an unpleasant event or a moment of remembrance.

Pentti Sammallahti (Finland), as a benchmark figure in contemporary Finnish photography, his work has a supernatural sense of a moment in time with the sensitivity and beauty of the world displayed through its animalistic existence. His particular use of dogs, which reflects the human existential experience, shows the shared nature of the earth with a gentle humor and fleeting attitude.

Boyd Webb’s (New Zealand) photographs draw on the techniques of scenography and model-making, the strategies of staging and display, to create a compressed universe in which human and animal, object and image, set and scenario are made, positioned captured and dissected.

Hugues de Wurstemberger (Switzerland) devoted himself to photography and developed his own style, preferably in black and white and medium format. The artist is constantly on the look out for moments of gracefulness, for images that transcend the unspectacular instant by transferring it into a larger context. His work was granted in 1990 by the Niépce Prize, in 1991 by the World Press Photo, and in 2002 by the Silver Prize.