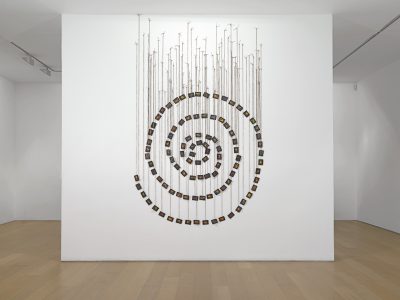 Annette Messager is one of Europe’s leading living artists. She began her career in the 70’s, initially exploring her own identity and by extension the prescribed role of women in the society of that time. Gradually, this exploration of hers assumed a more universal and timeless character. The role that the others- The Other- play in the definition of Identity is a prevailing issue in her work. At the same time, her work is characterized by the investigation of the diversity and multiplicity of objects, language and meaning. The concepts of possession and appropriation, according to herself, are at the center of her interest.

Three decades ago, at a time when minimalism and conceptual art prevailed, Annette Messager, started to incorporate knitting, sewing and embroidery in her artistic vocabulary, all of which allude to domestic practices, in contrast to the highbrow techniques one associates with Fine Arts. There is a clear domestic basis in her work not limited to femininity however. The artist is greatly interested in the idea of home, of the familiar and the domestic, mainly in the notion of the “microcosm, a world in reduction”. That is why she has always been using materials easily found in a home: colour pencils, fabrics, stockings, nets, sewing material and paper-clippings “everything that arrives into the home and stays”. Messager is still using the same, simple quotidian objects, not linked to technologies, seeking timelessness beyond the temporary.

A material broadly used by the artist, which has become a significant feature of her plastic vocabulary is the net. Although composed of holes, a net has the capacity to capture, restrain and confine. For Annette Messager the net both conceals and reveals as in reality it is used to retain elements while letting others slip through. In works like Spaaasm και Jalousie/Love the artist uses the net to formulate words.

Words and writing are of critical importance to Messager’s work. From the beginning of her career the artist used writing in various ways and methods. Printed or handwritten texts, words written on walls, copied or repeated on papers, embroidered or sculpted, words have a prevailing character in her work. Apart from the intricate meaning a word has, for Annette Messager it possesses a visual power. The form of each word, has as much significance as its meaning and the artist by manipulating words and texts emphasizes the visual and plastic image of the word.

The artist developed compositions made up of gloves broadly in the end of the 90’s. -lIke Grimace- Gloves (Gants Grimaces) or The Burning Bush (Le Buisson Ardente )-, Sometimes from these gloves, protrude colour-pencils, another object that features in her pieces. Messager uses pencils like minuscule spears, like needles, or prickles that pierce the soft materials of gloves, stockings or stuffed animal toy parts. The ordinary tools of writing and drawing are transformed by the artist into weapons of attack or defense, with a somewhat comic character and an indisputable, underlying sexuality. The coexistence of cruelty, violence and funniness is evident in Annette Messager’s works. Funny and cruel are merely two sides of the same coin, as if deriving from the fairy tales that once used to frighten and amuse us.