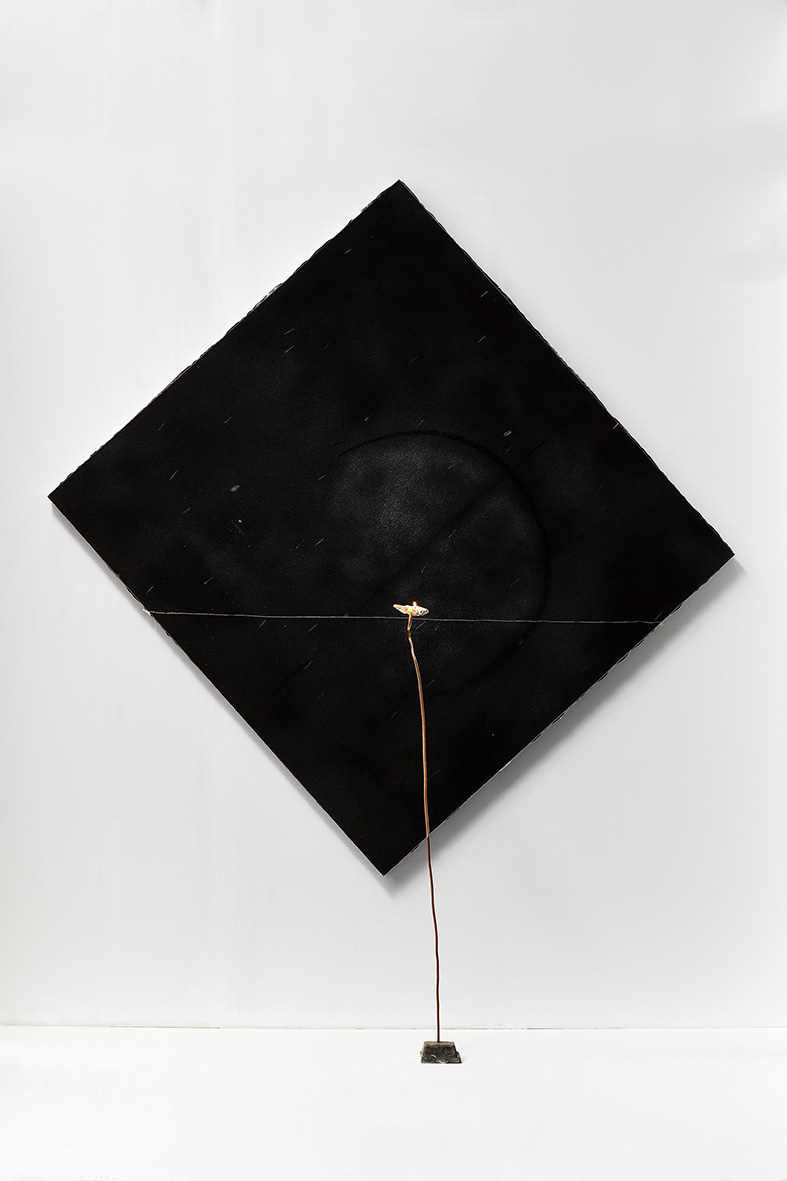 Pier Paolo Calzolari is recognized worldwide as one of the pioneering figures of the Arte Povera movement. He is considered one of the most important living contemporary Italian artists, whose practice spans painting, sculpture, sound, performance, architecture and video, among others. His first exhibition at the Bernier/Eliades gallery took place in November 1978, followed by solo exhibitions in 1981, 1984, 1990 and 2011.

Pier Paolo Calzolari was born in Bologna in 1943. He spent his childhood and adolescence in Venice, whose Byzantine artistic tradition and unique quality of light inspired and shaped the sensibilities of the future artist. In 1965 he returned to Bologna and set up his studio, where he created his first paintings and hosted exhibitions of other artists, presenting early 8mm and Super 8 films by Aris Markopoulos, Andy Warhol, Jonas Meka and Mario Schifano.

In 1966-1967 he created his first performance work “Il filtro e benvenuto all’ angelo”, which attracted viewers as active participants and incorporated light, darkness, grass and birds, inviting visitors to dress and undress, move and walk, contemplate and walk, with birds flying and people walking, sitting or lying on the grass. Calzolari called this work an “activation of space”.

In the late 1960s Calzolari became associated with Arte Povera and his text “La casa ideale” is considered one of the landmarks of this movement. He begins to create works using refrigeration and neon, such as “Oroscopo come progetto della mia vita” and the series “Gesti”, in which the formation of ice, accentuated by the passage of time, recalls the alchemical transformation of matter. Through this approach, the objects and materials used by the artist (fire, ice, lead, tin, salt, moss, smoke) take on another life, along with lighting elements that seem to echo the magnificent glow of Venetian marble.

Calzolari’s works bring everyday ritual to the level of aesthetic experience, in a horizontal relationship with the world and history. Their power is characterized by unique elements, such as the search for a saturation of the senses that verges on insanity, the way in which he makes visible the abstractions of thought and the essence of things, the special attention focused on the fragility of objects and materials.

In his new exhibition at Bernier/Eliades, the artist will present 20 new works in which he continues to incorporate sculptural elements made of organic matter, such as salt, feathers, clover petals and shells. His new use of raw pigment powders and tempera in strikingly saturated colors give these new works an exuberance that is both radiant and sensual. The luminous canvases include fields of bright primary yellows, reds, blues and whites with varied surfaces and textures that evoke nature in the form of sunlight, fire and the night sky, making this exhibition a meditation on the transience and delicate beauty of everyday life.

During the last years the artist has been living and working in Lisbon, Portugal.