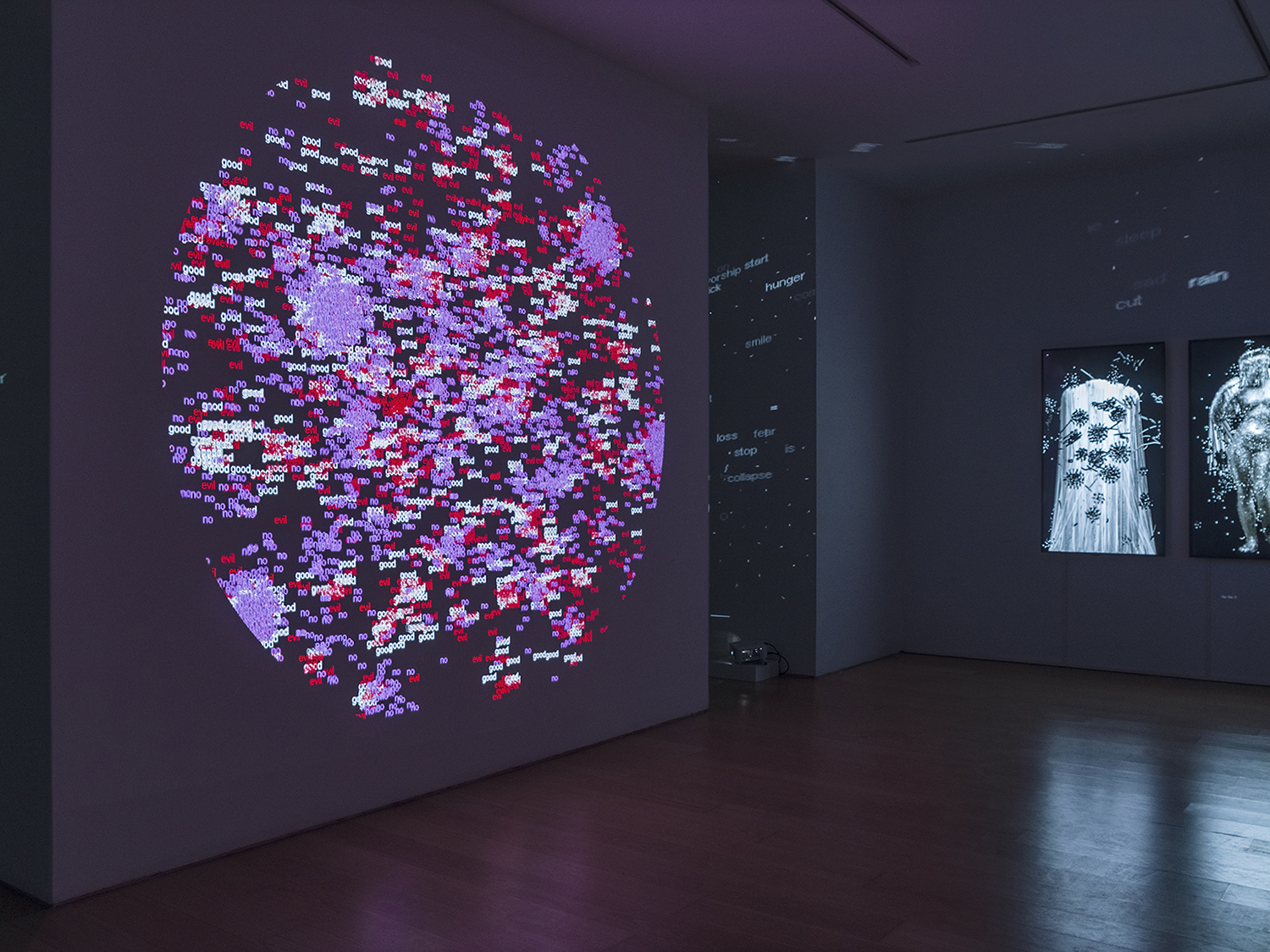 Bernier / Eliades Gallery is pleased to present the new solo exhibition of Charles Sandison “Garden of Light”. It is the third time the artist exhibits at the gallery.

Originally from Scotland, Sandison studied at the Glasgow School of Art, graduating in 1993. After moving to Finland almost 25 years ago Sandison has worked mainly with computer generated video projections that combine language, form, architecture, and movement. His installations have been represented in Europe, Asia, Australia, South America, and the USA. Notably in the Venice Biennale (2001) Sandison exhibited his acclaimed work; ‘Living Rooms’ which brought him to international attention. His work is present in major national collections around the world, including Reina Sofia, Madrid, Denver Art Museum, MAXXI Rome, Kiasma, Helsinki, and Bonn Art Museum. From 2003 he was a visiting professor at Le Fresnoy, Lille and has lectured at the Sorbonne Paris. In 2010 Sandison was awarded Finland’s Ars Fennica art prize and in 2012 the Finnish Cultural Foundation Art and Science Culture award.

The Garden of Light

The garden of light comprises interwoven video projections and large screens that invite the audience to immerse themselves in the digital glow of an alternate universe populated artificial intelligence life forms. Words, numbers, signs, and symbols roam freely around the walls. Sometimes briefly merging to form human figures and then exploding into a storm of letters, they transform themselves from one lexicon to another. Sandison combines his ability to write complex computer programs with a savant like spatial dexterity that visualises the hidden world of data that surrounds us. The computer for Sandison operates like an oracle.

“At the centre of my works is ‘simulation’, especially scientific modelling of natural systems or human systems to gain insight into their functioning. Simulation can be used to show the eventual real effects of alternative conditions and courses of action. Simulation is also used when the real system cannot be engaged, because it may not be accessible, or it may be dangerous or unacceptable to engage, or it is being designed but not yet built, or it may simply not exist”.

Central to the exhibition are interrelated themes of environment, identity, morality, and memory.

Multi-channel video installation “Et in Arcadia ego”, is a biological collage that uses artificial intelligence to create an imaginary eco-system that constantly swings between chaos and entropy. The artwork is a self-contained reality that explores the potential for a utopian world where humanity exists harmoniously within nature.

In “Male and Female” the computer analyses a dataset of historical 2D and 3D imagery for ideals of figurative harmony in the human form throughout history. Using artificial intelligence, the resultant data is re-configured to create visualisations, a series of never repeating hybrid authenticities.

The words in “GOOD AND EVIL AND YES AND NO” suggest an opposition of type, reflected in the timeless idea of the struggle between extreme opposites. The words are animated using similar genetic codes as found in microorganisms such as bacteria or cancerous cells.

In “Origin II”, texts coming from the bible and Charles Darwin’s “On the Origin of the Species” offer explanations for the origins of humanity.

The work “Woman in a Blue Dress” draws on the ideas of loss and grief woven into a fabric as an act of memorial.

In all the works the artist seeks to open a dialogue between the viewer and the extraordinarily complex digital society we inhabit.

“For some reason I was born with an innate ability to speak to computers in their own language. For me, computer code sounds like poetry”.