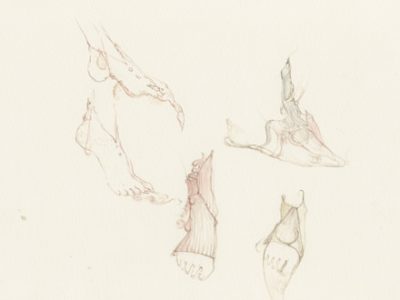 Christiana Soulou with her work in the past two decades has shown a drawing practice which is defined by its consistency, rigor, depth, and precision, reaching with her line qualities of great subtlety.

Her strength lies in Rosalind Krauss’ definition of “being out of fashion”, as with an obsessional devotion her works appear to be timeless. Soulou’s work occupies the significant place between inspiration and redefinition. If anything traverses the entire breadth of her work, this is a constant dealing with the enigma of death and therefore of love-eros (or at least of erotic fantasy), given their interdependence. Her work presents an “honest drawing”, pure, psychological, therapeutic and most of all magical, that seems to be an antidote in our days, as it leaves the impression that the act of drawing itself can be a kind quest of self-exploration towards a larger more universal goal.

As Donatien Grau states: “If we are to use the phrase «drawing inspiration» in relation to her work, it will perhaps be less in the sense of drawing inspiration «from…», than in, literally drawing inspiration: making a drawing that expresses, transcribes and eventually becomes an inspiration itself, once made visible.″ For this show, Soulou presents about 40 drawings and watercolours with figures, freely inspired from Paul Valéry’s “Soul and Dance” and in the spirit of figure as described by Roland Barthes: A Figure that can only be compared to σχήμα in the ancient Greek and choreographic acceptation of the world. Roland Barthes explains: “The Greek σχήμα is not our schéma, but something far more intense: It is the body gesture as we perceive it in action, not as we contemplate it at rest…” In Soulou’s work, exploration of the form (its evolution and transformation) passes through the body’s action and the gesture of movement.

Her works perceive this action and redefine the role of mask. In a constant blending with the drawn figures, the presence of mask, in many of her works, acts either as a vector of a double power: of simulation and dissimulation, or as a supply (supléant) that creates a new face; in all cases it works as a manifestation of the human condition. “The mask is the direct lie –the instant and simultaneous lie that accompanies the reality that means to dissimulate”. (Starobinski). The mask in her work opens a field of reflection upon the relation between real and simulacrum, ending up by asking the question of the portrait: A portrait, not only that of a face but also of a figure or of anything, is what carries -through the lines, the signs and the characteristics of the form-, that which resists and remains; what is marked from the physiognomy of things. The “body gesture as we perceive it in action”, becomes in her work the gesture that resists and remains; -what is marked out of the body in action and eventually what makes it be. As the artist says: “What interests me is not the fabrication of costumes but mostly the possibility of a new – face that can result out of a costume that, seen as a mask, can be deployed, spread all over the entire figure and become a supply or a duplication of it. A naked face can be a mask, the same stands for a hand.  The mask of a face might be its real face. A shoe is the portrait of a foot.”