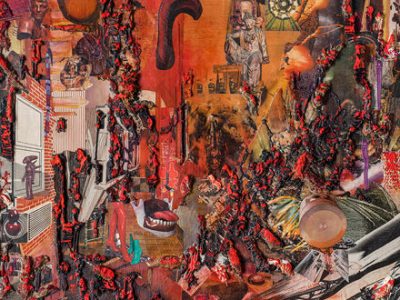 Bernier-Eliades is pleased to present an exhibition of new works by the Los Angeles-based artist Elliott Hundley. Elliott Hundley is known for his dazzling multimedia compositions that reference both art history and mythology. His work brings together scenes from the past with recognizable imagery taken from the contemporary world. The artist creates complex and mesmerizing works, incorporating a spectrum of varied materials, employing content-rich resources that are psychologically intense to form a kind of decentralized cultural map.

Whereas his earlier bodies of work have focused on classical Greek tales such as Euripides’s tragedy The Bacchae, this exhibition is moving from antiquity to the modern, based on the artist’s historical research on theatre, literature and film, loosely referencing Antonin Artaud’s plays. On view will be a series of billboard collages forming an ongoing visual narrative.

Hundley builds up the layered and labored surface of his works using paint, magazine cutouts, fabric, straight pins, found objects and other materials sourced from his extensive archive. With complex accumulations of imagery and painted gestures adjoining three-dimensional elements protruding from the surface, his vibrant works are vivid and playful. One can’t even trace the surface of these works, producing perceptual effects. These brimming, insidious canvases impose a state of disquiet and hint of hidden violence with depictions of internal organs, crowds, ants and animals.

Despite their elaborate rendering, Hundley’s compositions keep a delicate balance between abstraction and representation. They defy time and gravity, shivering and vibrating with their own cosmic energy.  These billboard collages are existing for their own sake, swirling over a sense of chaos and resisting attempts at deciphering. Each one represents a different state of anxiety and echoing the moment of an imminent disaster.

Elliott Hundley (b. 1975, N. Carolina, USA) received his BFA from the Rhode Island School of Design (1997) and his MFA from the University of California, Los Angeles (2005). The artist lives and works in Los Angeles.

In 2011, Hundley’s major solo exhibition The Bacchae opened at the Wexner Center for the Arts in Columbus, OH and travelled to the Nasher Sculpture Center, Dallas, the following year. His work has been featured in numerous group shows, including the Museum of Contemporary Art, Los Angeles (2015, 2013 and 2009); International Center for Photography, New York (2013); Louisiana Museum of Modern Art, Humlebæk, Denmark (2012); New Museum, New York (2010); and Guggenheim Museum, New York (2007).