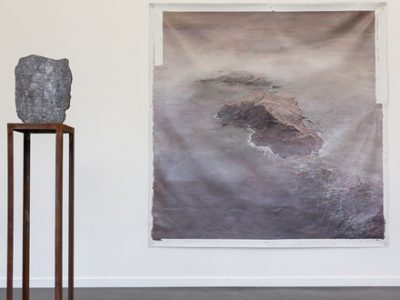 Giancarlo Scaglia’s “Golden Aérea”—a reference to the golden ratio—suggests a quest for some sort of balance in the relationship between history and memory, specifically that of the infamous Peruvian prison massacres of 1986.

Working at El Frontón Island, in Lima, a former maximum-security prison, the artist uses its remnants to attest to the violent confrontation between the Peruvian Navy and terrorist inmates who rioted and took guards hostage on June 18, 1986 (a simultaneous uprising in three prisons), and which ended the next day, leaving three servicemen, one hostage and 133 prisoners dead (the total death toll in the three prisons nears 300).

Scaglia creates what could be deemed “negative memorials” to commemorate the absence of a collective memory (being in dispute, for there is an ongoing trial about the massacres), of the people dead, and of the rule of law—breached by summarily executing many of the prisoners killed.

To this end, the artist turns the prison walls into a sort of engraving plate that he inks to create prints of the bullet holes, which resemble sky maps, hence the name Stellar. These indexical
images of conflict points to the stars—symbols of hope and longing—, i.e. precisely that which was taken away through captivity and death: a future to look forward to (after all, the terrorists’ wager was on the future: revolution, seizing power, etc.). But also, as frottages, the Stellar series entails a bodily relationship with those walls that had been covered in graffiti with calls to armed struggle, and which were splattered with blood from the many inmates shot dead against its backdrop. As one contemplates these “stars” one wonders which ones were right on target.

Scaglia also uses the torn walls as sculptural mold to cast in lead the forms of its perforations —the result of the use of explosives and artillery on the compound. The lead volumes of the Eclipse series materialize the pieces of wall blasted away, embodying the void by filling it. It could be argued that these works are traumatically attached to the moment of the blast:
“fixing” the hole, while fixating the violence that burst through it, like a mass of compacted ammunition—as so many explosions still echoing in our minds, still piercing through our social fabric.
Additionally, the artist produces figurative and abstract paintings that portray the island. The Silver series presents realist scenes of the desolate isle, its grey skies and seas, and its birds, while the abstract canvas Golden Area has been left out in the open to gather bird droppings, dust, etc. These paintings constitute, respectively, a representational and a conceptual record of the current state of abandonment of the island.

Through these works, Giancarlo Scaglia points to that which is not there: the lives lost in that confrontation of June 1986, and, by extension, the almost 70,000 deaths that resulted from the armed conflict that ravaged the nation between 1980 – 2000. By making out a tangible form of this emptiness, and by creating an effigy of this absence, Scaglia memorializes and materializes a void which we cannot or do not want to see, but with which we stumble upon,
inevitably.