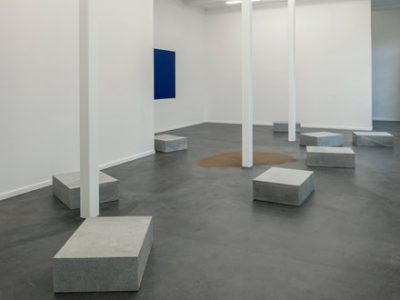 Giovanni Anselmo was born at Borgofranco d’Ivrea (Turin) in 1934. He lives and works in Turin.
He is one of the artists of Arte Povera who, since the mid-1960s, have radically renewed art by turning away from traditional forms and turning toward new, poor and natural materials. He shares with other artists of Arte Povera the desire to incorporate into art the real factors of time and energy. At the centre of his art which integrates nature, perception and philosophy stands the human being: the artist calls on each individual viewer to engage, directly and critically.
In the work Dove le stelle si avvicinano di una spanna in più mentre la terra si orienta (Where the stars are coming one span closer while the earth finds its bearings) 8 blocks of granite are placed in a constellation around the central sculpture made of sifted earth spread on the floor. A magnetic needle has been placed in the center of this small mound of dirt, indicating the bearings of the work itself.
The artist expects that visitors will step on top of the stones and, in this way, they come one step closer to the stars.
In 2007, a work with a similar concept was shown at the 52nd Venice Biennial, Think with the Senses – Feel with the Mind. Art in the Present Tense.
The artist describes the work Oltremare appare verso oriente (Oltremare appears towards the East) with these words: “The term Oltremare [Ultramarine] defines the blue colour which in the past was imported from overseas. The stimulus it can offer is not only visual but also mental, indicating a place beyond the walls of the gallery towards which both the work and the spectator turn. It is in any case a place that exists, because wherever you go there is always an overseas farther on.”
Anselmo’s works have been exhibited in the major European and American museums, in solo exhibitions including Castello di Rivoli (Turin) in 2016, Musée d’Art Moderne et Contemporain, Saint-Étienne Métropole in 2015 and Kunstmuseum Winterthur in 2013, as well as in international events such as Aichi Triennale, 2016, Istanbul Biennial, 2015, Venice Biennial, 1978-1980-1990-2007 and Documenta, 1972.
In 1990 he was awarded the Leone d’Oro for Painting at the 44th Venice Biennial.