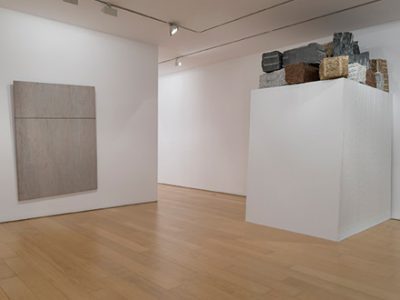 Giovanni Anselmo’s fourth solo show at Bernier/Eliades, is opening on Thursday April 17, 20:00-22:00, at the gallery in Athens. The artist will be present at the opening.

Giovanni Anselmo is one of the legendary artists of Arte Povera who, since the mid-1960s, have radically renewed art by shifting away from traditional forms towards new, cheap (poor) and natural materials. He shares with other artists of Arte Povera the desire to incorporate into art the real factors of time and energy. Drawing his inspiration from his study of latent physical forces such as gravity and magnetism as well as the forces that rule our entire universe, the artist creates sculptures from found objects, from a variety of stones, plants and other organic material.

At the centre of his art, which integrates nature, perception and philosophy, stands the human being: the artist calls on each individual viewer to engage, directly and critically and to confront his position within the natural order and the universe.

Anselmo’s works manifest that which cannot otherwise be seen; they are not representations of reality but constitute a reality in themselves. For the artist, the world, all things, as well as his own presence in it and even life itself, they all incorporate energy situations. For Anselmo what is essential is not to crystalize these situations by merely representing them but to “keep them fluid and alive”. According to the artist, his works manifest his feelings as the energy that emanates from a situation or event, As he himself puts it: “Since every appearance, every situation contains its own energy, work of this kind demands the most absolute freedom in the choice and use of materials.[…] For me, my work is simply my pursuit of this vision of life. I know no other way to reach the living essence of reality, a reality that becomes in my works an extension of my living” (from “Arte Povera”, by G Celant, 1969).

Giovanni Anselmo was born at Borgofranco d’Ivrea (Turin) in 1934. He lives and works in Turin. Anselmo’s works have been exhibited in the major European and American museums, in solo exhibitions including Castello di Rivoli (Turin) in 2016, Musée d’Art Moderne et Contemporain, Saint-Étienne Métropole in 2015 and Kunstmuseum Winterthur in 2013, as well as in international events such as Aichi Triennale, 2016, Istanbul Biennial, 2015, Venice Biennial, 1978-1980-1990-2007 and Documenta, 1972. In 1990 he was awarded the Leone d’Oro for Painting at the 44th Venice Biennial.