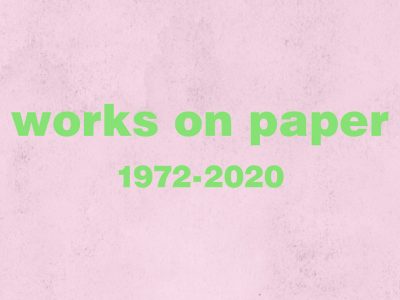 From February 20 to April 2, 2020, Bernier-Eliades Gallery will be presenting works on paper created from 1972 until today, by the older and younger generation of artists that have been collaborating with the gallery.

Alexis Akrithakis (1939 -1994, Athens) spent the first years of his career in Berlin where he studied and worked. He developed a painterly idiom which parodied the traditional language of art by introducing elements from comic books in his work.

Stephen Antonakos (1926, Greece – 2013, USA) emigrated with his family in America in 1930, where he grew up and studied. He was one of the first artists to use neon in his paintings and sculptures of the sixties. Colored pencil drawings on paper and vellum, often in series, have been a major, rich practice since the 1950s; as has his extensive work with collage.

Delia Brown (1969, USA) is well known for a more refined and incisive realism, based on photographs she stages and shoots herself. She often appears as a character in her own paintings, keeping the point of view personal and passionately ambivalent, always implicating herself in the critique.

Michael Buthe (1944 – 1994, Germany) was one of the most vivid personalities of the German art scene, dividing his time between Cologne and Marrakesh during the 1970s. His work creates a vital narrative atmosphere in which colors, signs and found objects from everyday life from his own and foreign cultures are arranged into mythical symbols and play worlds.

Paolo Colombo’s (1949, Italy) paintings illustrate a lyrical series of moments, each holding the highest intensity.  Ranging in sizes to be peered into or poured over, they open across saturated washes of color, checkered squares, fine lines or lettering with the consistency of embroidered cloth. Chosen in part for its resistance as a medium to correction, we see water colors in their most soft or dense tones employed to transcribe his poetry or illustrate images culled from memory.

The works of Dionysis Kavallieratos (b.1979, Greece) resemble oversized distorted and reformed instaces of his personal mythological universe with a humorous touch of a sharp irony. His works capsize history with erudite references ranging from comic books and Dante’s Inferno, to fairy-tales and Al- Qaeda alike.

The work of the best known South African William Kentridge (b.1955, Johannesburg) tracks a personal route across the fraught legacy of apartheid and colonialism through an innovative use of charcoal drawing, prints, collages, stop-animation, film and theater. Kentridge sees his work as rooted in Johannesburg – the city in which he was born and continues to work today.

Jannis Kounellis (1936, Greece – 2017, Italy) is recognized worldwide as a leading figure of the Arte Povera movement and acknowledged as a visual philosopher building up a new vocabulary of diverse materials to compose a poetic history of meaning. Kounellis holds an Artist Room at the Tate Modern, while his works are in the Guggenheim and MoMA NY Collections, amongst other museums and foundations worldwide.

Richard Long (b. 1945 England) belongs to the pioneers of Conceptual art. Since 1967, Long is transforming his walks into works of art, sculptures, photographs and texts. His work is both modern and “primitive” conceptual and physical, focusing on the concern for both the finished work of art and the process of its completion.

Valérie Mannaerts (b. Belgium,1974) extends the medium of collage to include three-dimensional  objects. Her work examines the borderline between image and object, focusing on the material world, the visual culture, physicality and states of consciousness.

Brice Marden (b. 1938, USA) continuously refines and extends the traditions of lyrical abstraction. Experimenting with self-imposed rules, limits, and processes, and drawing inspiration from his extensive travels, Marden brings together the diagrammatic formulations of Minimalism, the immediacy of Abstract Expressionism, and the intuitive gesture of calligraphy in his exploration of gesture, line, and color

Marisa Merz (1925 – 2019, Italy) was one of the key personalities and the only woman associated with the Arte Povera movement in the late ’60s and ’70s. Known for the unusual use of materials such as copper, wire, clay and wax, the sculptures and drawings of Merz reflect her poetic sensibility and vision for art and life.

Mario Merz (1925 – 2003, Italy) He was the leading figure in the Arte Povera movement. Internal cohesion in his works stems from his adoption of the numerical sequences of Fibonacci and his work is an endeavor to reveal the correlation between biological development and artistic form.

Annette Messager is one of Europe’s leading living artists. She began her career in the 70’s, initially exploring her own identity and by extension the prescribed role of women in the society of that time. Gradually, this exploration of hers assumed a more universal and timeless character. She won the Golden Lion at the 2005 Venice Biennale.

Juan Muñoz (1953 – 2001, Spain) was a sculptor working primarily  in paper maché, resin and bronze. He was also interested in the auditory arts and created compositions for the radio. He was a self-described “storyteller. In 2000, Muñoz was awarded Spain’s major Premio Nacional de Bellas Artes in recognition of his work; he died shortly after, in 2001. His works always convey metaphors or images to tell us something, if possible else than that which immediately meets the eye.

Nikos Navridis (b. 1958, Greece) investigates the capabilities of drawing by setting questions concerning the medium’s narrative nature. A sum total of lines, shapes, architectural elements, organic forms, natural motifs, mechanical limbs, in some way unfolds stories that can be followed, even though they may be hard to describe. His work activates memories and follows routes that progress from drawings by Antonio Gaudi to anatomical impressions by Bourgery and Jacob, from early seventies San Francisco psychedelia to the Cybertron Transformers, and to the experimental drawings of “systems in crisis” and artificial the landscapes of Lebbeus Woods.

Tony Oursler (b.1957, USA) stands as a major figure within the evolution of video art. His art covers a range of mediums working with video, sculpture, installation, performance and painting. During the last years, Oursler explores the ways in which the human body uses its own corporeal mechanisms, especially the face and head, to express identity and project emotions.

Raymond Pettibon (b.1957, USA) is perhaps the most important contemporary American artist who focused on drawing as a primary medium. While his style was originally based on the animated illustration,

he developed a very personal approach characterized by a unique and sophisticated relationship between image and text.

Daniel Richter (b.1962, Germany) is considered as one of the greatest representatives of the New Abstraction. In the centre of his interest is found everything that is closely bound with contemporary society, big cities, its majorities and minorities and their specific modes of action. He creates monumental, representational paintings drawn from images of social struggle found in everyday life.

Jim Shaw (b.1952, USA) belongs to the generation of American artists that have shaped the cultural west coast of USA during the late ‘80s till today. His work is interwoven with American pop culture elements that alternate in a structural context of narrative themes. He is a conceptual artist known for playing cut and paste with styles ranging from Minimalism to monster magazine illustration, through several multipart, quasi-narrative projects.

Christiana Soulou (b.1961, Greece) drawings are characterized by sensitivity and an almost academic rigor, commenting upon the human condition. In her works one can easily observe a particular attention to mental and psychological states, and a direct relationship with dance and theater. Her drawings seem to deal with and continue a tradition dating back to the puppet show of Heinrich Kleist and reach the work of Oskar Schlemmer and Hans Bellmer.

Alexandros Tzannis’ (b.1979, Greece) series titled ‘Blue Black Layers Over the White Cities’ has been ongoing from 2015 until today. It concerns mapping of areas of cities, particular details or specific places of those. Drawings made of ink and pen, in multiple layers of black and blue covering the white paper in a correlation to the layers of melancholy and darkness which cover the cities.

Kara Walker (b. 1969, USA) recalls in her works the picture of life in the United States before the American Civil War era, in order to demonstrate the absurdity and cruelty of slavery. Her work is an explosive mix of tribal violence and sexual relations. The nature of the stories she tells is nightmarish, but reveals a provocative sense of humor, finally turning our attention to the horrors and contradictions of a system based on the abuse.

Lawrence Weiner (b. 1942, USA) is a pioneering Conceptual artist of the 1960s. His texts have appeared in all sorts of places over the last five decades, and although he sees himself as a sculptor rather than a conceptualist, he is among the trailblazers of the 1960s to present art as language.

For a growing number of viewers and artists, Sue Williams (b. 1954, USA) is the first painter in recent memory to plunge deep into the taboo-ridden areas of psyche and come back not merely to tell the tale, but to poke and prod viewers into cheering her along.  In all the phases of her painting she has remained true to one principle:  She dissolves forms in abstraction but at the same time she allows a corporeality to emerge through the gestural brush strokes against a monochrome background.

Robert Wilson (b. 1941, USA) is one of the leading reformers of the theater. He studied architecture and Business Administration at the University of Texas and the Pratt Institute in Brooklyn and painting in Paris. The drawings, paintings, furniture, sculpture and multimedia installations by Robert Wilson,  have been presented in exhibitions around the world. He has received many awards among them the Golden Lion for sculpture at the Venice Biennale.

Gilberto Zorio (b. 1944, Italy) is also a representative of Arte Povera, using different materials such as metal, light and laser. His aim is to create phenomena associated with the energy produced by the combination of certain materials.