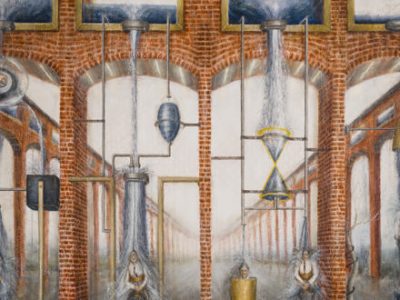 “we have come this far that we inevitably
for years already we have the feeling that it never again
that what was unthinkable, has become from one day to another
what we have always known has suddenly completely
it has no form yet but sometimes we can
and still we remain convinced that one day
there is no single reason to believe it but
something that is so new that it won’t be us who
no idea how long we can keep on going but never we will”

The Bernier / Eliades gallery is pleased to present the first solo exhibition of Helmut Stallaerts, in Athens, on Thursday, February 2, 20: 00-22: 00.

In his new show entitled “Ignoramus”, the artist will present thirteen paintings.

The main focus in Helmut Stallaerts’ complex and broad oeuvre is undoubtedly man. His human figures are alienated, blurred and absent but in a rather theatrical and often awkward way, they are exposed to the public. Their actions frequently smack of an undefined ritual. The environment in which they live in is similarly alien: without any anecdotal detail, sterile and cold. And the atmosphere is always absurd strange and dark.

The obsessive aesthetics of Helmut Stallaerts create a sacred dimension through which the works always relate to one another. In this manner the artist creates a core around which all his works circulate. This enigmatic core, however, remains open: one can merely get closer to it, but never actually reach it. Stallaerts’ exhibitions have the power to generate a view on the mysteries of being and it also confront us with a truth that remains dark and that unhinges our own fictive truths.