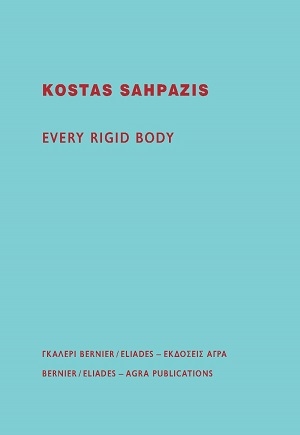 The Bernier-Eliades Gallery, is pleased to present the first solo exhibition of the greek artist Kostas Sahpazis, on Thursday, April 7, 20:00-22: 00.

Kostas Sahpazis is a contemporary sculptor. He is an artist that uses, what one may call, new materials and new media, yet in its essence, his process is strongly based in the predominantly plastic techniques. The works start at a full draft, which are in turn transferred successively to different materials. This process presents both the final design and material and the intermediate stages of creation. Therefore, the remains in every sculpture become the witnesses of this process. Overlapping coatings of materials offer multiple skins which sometimes tend to reveal, instead of concealing the inside. Break-ins in form and design justify the existence of the work’s surface. It is in the surface of the work that lies the essence of its substance. Kostas Sahpazis uses volatile materials but each time with a creatively transgressing way, approaching their limits.

He leads materials into a situation of mimicking behaviors and qualities in order to lend them properties that were never presented before. He constructs essential and solid bodies whose composition results from more than one material. A blending which was not aimed to happen, as the materials coexist while preserving all their original properties and they are bound together by pattern and color. What is important in Sahpazis works is the use of void and the management of the forces that hold the surface of the objects.

These two elements produce an image that is intensely perceived in the last layer and serves as the main revealing element for each work. Through the pliable raw material, the alternating forms, the assembling of elements and the produced forms, the viewer’s experience becomes tactile and although the works welcome an exploratory touch, the fealing of touch is already satisfied merely by sight. Every object, each work of the exhibition, every rigid body, a unit of an open set, realizes its fragile nature, and its called to function as a completed organism when it is nothing more than an instrument performing a specific operation: to interact with the viewer, to place the viewer into a process of observation, to define the position before it and finally to seek and receive continuous readings.

Born in Thessaloniki, Greece in 1977 Lives and works in Athens