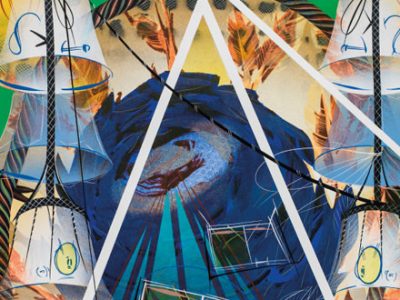 Bernier-Eliades Gallery is pleased to present an exhibition of new works by the American artist Lari Pittman, on Thursday, 11 April, 18:00-22:00. It is the first time the artist presents a solo exhibition in Greece.

Lari Pittman (b.California, 1952) is inspired by commercial advertising, folk art and decorative traditions, to create paintings with intricate scenes full of intensity, diversity and desire. His hallucinatory works make reference to myriad aesthetic styles, from Victorian silhouettes, to social realist murals and Mexican “retablos”. Pittman uses anthropomorphic depictions of furniture, weapons, animals, fruits and fishes, – loaded with symbolism – to convey themes of romantic love, violence and mortality. His works demonstrate the complementary nature of beauty, suffering, pain and pleasure and direct the viewer’s attention on the value of sentimentality in art. Despite subject matter that changes from series to series, using simultaneous narratives and opulent imagery, Pittman reflects the heterogeneity of American society and the distorting effects of hyper-capitalism in everyday life.

In his new body of work,  Pittman mines a myriad range of sources to create an evocative mixture of readymade iconography and his own symbolic language, deftly moving between recognizable motifs and the shifting resonances of his uncanny forms. These densely layered surfaces are shaped by a collision of imagery that speedily oscillates among Pittman’s varied mark-making techniques to generate a simultaneity of formal and narrative events. While the visual vocabulary of Pittman, constantly testing the limits of transportation, substance and aesthetics, his works indicate an emotional intensity that is both personal and universal in relation to time, mortality, nostalgia and loss.