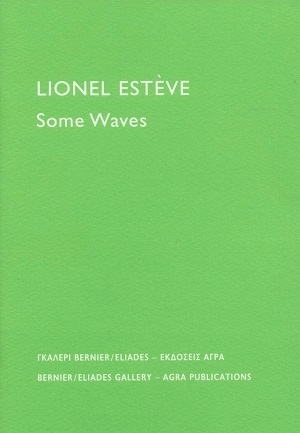 Bernier/Eliades Gallery is pleased to announce the third solo exhibition by Lionel Estève entittled  “Some Waves”, on Thursday May 29, 20:00-22:00.

Lionel Estève has established himself as an artist creating works made out of small, tiny elements, which were formerly part of another project. They are characterized by extreme dimensions, intense combinations of color and a variety of materials such as: rocks, rubber, rope, cloth, glass, paper, used to create sculptures, drawings or collages waving between abstraction and representation. Each of his works can be defined as a spatial drawing where the colors flow either fast or quietly. By being both non-formal and fragile, Estève’s works are extremely powerful, insofar as they direct the eye more than they are to be looked at for themselves. They stimulate perception of an infinite reality, by unveiling an almost tangible space. In his third exhibition at Bernier/Eliades Gallery, Lionel Estève, through glass paintings, embroidery work on fabrics and some large glass bells, will materialise a few waves and vibrations, hoping to give birth to as many emotions as he can.

“How to give body and freeze these movements that are the emotions? The sound of a bell, hair over one shoulder, the movement of a curtain: these are motions, similar to waves which are heavy, muted, slightly fluffy, almost brittle and crystalline. Some are internal while others are rising to the surface, large or small, they overwhelm us or they are holding us. It is not known with prescision where they come from and we can logically assume they will go out somewhere, at some point. Are we swimming in these emotions, like waves?”
Lionel Estève