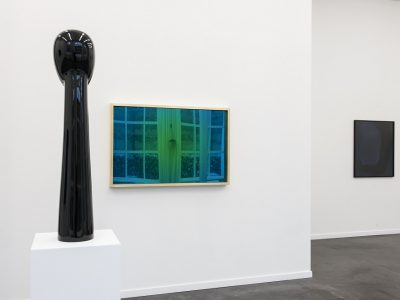 The photographs, videos, wall works, sculptures and new VR works by Louisa Clement, born in Bonn in 1987, are concerned with phenomena of the sense of confusion in time of political and societal uncertainty. Clement’s varied investigations into everyday design prove to be seductive yet unfathomable: What is it to be human in a digital age in which even the integrity of the body is increasingly called into question by massive medical interventions?

In her detail-like photographs, Clement conjures up, in almost surreal fashion, a new image of the body that stands at the same time for the ambiguous vision of a “new human being”. With the aid of her photographs taken with her smartphone camera, not only the illustrative function of the image medium is queried, but also the reality of the technically modified human being.

Louisa Clement studied at Karlsruhe State Academy of Fine Arts and Düsseldorf Art Academy. She was a master student of renowned photographer Andrea Gursky, artificial environments. Clement’s works have previously been shown in group exhibitions at the Wallraf-Richartz-Museum, Cologne and Braunschweig Museum of Photography.

Founded in Athens in 1977, the Bernier / Eliades Gallery has continuously been at the forefront of contemporary art in Greece. In April last year, Bernier/Eliades opened a new space in Brussels.