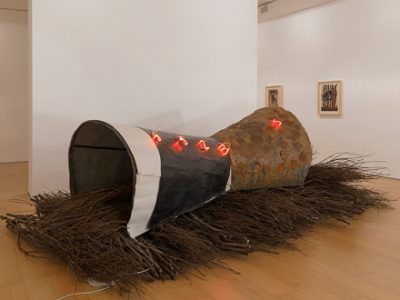 Mario Merz was born on 1st January 1925 in Milan and moved with his family to Turin as a child. During the Second World War, he abandoned his university studies in medicine and played an active part in the struggle against the Fascists. Arrested in 1945 whilst distributing of handbills, he began painting in jail, drawing the beard of a cell companion in infinite spirals. Following the liberation, encouraged by the critic, Luciano Pistoi, Merz decided to dedicate himself entirely to painting. His first one-man show took place in 1954 at the Galleria La Bussola in Turin, and presented some expressionist-style oils on canvas.

By the middle of the 1960s, Merz’ research had developed and evolved towards an artistic experimentation that led him to produce “volumetric paintings” (Mila Pistoi): canvas constructions enveloping objets trouvés, organic or industrial materials, whose appearance in the work contributed to place the artist amongst the protagonists of Arte Povera. Everyday objects – hampers, pots, raincoats –, organic items – woodpiles, beeswax, clay –, technical materials – metal washers and mesh, glass, neon –, quotations (including non-literary ones), manifested themselves as hitherto neglected energies in art which Merz liberated in a “sum of interior projections on the objects”, translating them sometimes “directly into the objects” (Germano Celant), reinterpreting them in repositioning them within new panorama of forms and pronouncements.

The igloo (1969) and the table (1973) appeared: one “forms an ideal organic […], at one world and small house” that the artist presented as inhabitable, an absolute space that was not modelled but a “half-glove placed on the ground”; the other “the first thing […] for the determination of space”, “a piece of raised ground, like a rock in the landscape”. Igloo and table are, despite the primary and archetypal structures, both aesthetic and socio-political declarations in their representation of the definitive  move beyond the picture.

1970 saw the start of the numbered Fibonacci series, a progression in which each number is the sum of the two before (0, 1, 1, 2, 3, 5, 8, 13, 21…). Merz interpreted the numerical sequence – identified by the Pisan mathematician Leonardo Fibonacci in 1202 – as the emblem of the dynamics associated with the growth processes in the organic world, placing the number in neon on his own works, from the preview of the Fibonacci Santa Giulia, hung in the kitchen of his Turin home (1968), to the Suite buried along no. 1 tram line in Strasbourg (1994), and from the above-mentioned proliferating tables of John Weber to the fibrillation of the igloos at the Zurich Kunsthaus (1985), and on to the Salpêtrière in Paris (1987) and the co-penetration of tables and igloos (at the Capc, Bordeaux, 1987, and the Stedelijk, Amsterdam, 1994).

The recurrence of given forms which all lead back to the spiral, such as the triangle, cone, vortex, and visualised artistically, inferable or discerned in an infinite series of mostly organic elements such as snails, branches, leaves, pine cones, horns, is connected to the same series of Fibonacci, a numeric transcription of a figure which, starting from zero, expands infinitely in a spiral development.

The major exhibitions of the 1980s (Palazzo delle Esposizioni di San Marino, 1983 and Guggenheim in New York, 1989) were characterised by a pictorial practice that took on increasing significance, becoming “long and fast”, a natural habitat for wild, “prehistoric” animals such as the rhinoceros, crocodile, tiger, bison, owl, all of which were also bearers of a clear primacy.

The animal portraits are “religious but also organic symbols” flanked and assembled on the previously identified forms (the igloo and table, and their transfer to canvas) and on the objects (neon, bottles, raincoats, newspapers, snails, Merz the “shaman’s” tree), with a proliferating, spiral cadence marked by the Fibonacci series. But they are also subject to a process of metamorphosis (technically effected by abolishing frame and priming, and by allowing the paint to soak into the canvas, “so that it is primed by the paint, rather than merely constituting a support”), which causes paws to emerge from the painted canvas so that it can become the animal it portrays.

This intense period, during which the artist also published a sizeable sylloge of writings (Ich will Sofort ein Buch machen/Voglio fare subito un libro, Sauerländer, Aarau-Frankfurt and Hopefulmonster, Florence), was followed by a phase characterised by a return to the essential nature of matter and line (one-man show at the Fundaçâo de Serralves, Porto, 1999).

Considerable importance was given to drawing which became the protagonist of a series of large installations. The artist exhibited at the Carré d’Art – Musée d’Art Contemporain, Nîmes (2000) and for the first time in Latin America with a one-man show at the Fundación Proa, Buenos Aires (2002). He took part in Zero to Infinity: Arte Povera 1962-1972 (2001), the first anthological exhibition on Arte Povera in the United Kingdom, organised by the Tate Modern in London and the Walker Art Center of Minneapolis. The 6th November 2002 saw the inauguration of the permanent installation, Igloo fontana, for the railway bypass in the city of Turin. Amongst the many honours received were an Honorary Degree from the Dams in Bologna (2001) and the Praemium Imperiale of the Japan Art Association (2003).

Artist died at dawn on 9th November 2003 in Milan.