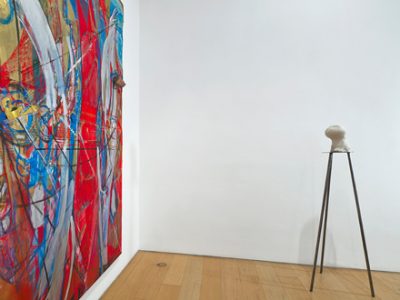 Bernier-Eliades gallery is pleased to present the exhibition of mariza merz on the Thursday, October 10th, 20:00-22:00.

Μarisa Μerz is one of the central figures and the only woman artist participating in the historical movement of arte povera. renowned for her use of unusual materials, such as copper wire, clay and wax, Μerz creates sculptures and drawings reflecting a poetic sensitivity and gently unfolding her vision of art and life.

Τhe arte povera movement was formed by the late 60’s with the aim to challenge the established beliefs and practices regarding the processes and materials which then defined artistic creation in the western hemisphere.

Αlong with the other artists of the arte povera movement, including her husband mario merz, marisa merz starts incorporating in her works everyday and organic materials, in an effort to challenge the elite status associated with art works in the realm of consumption culture of modern capitalism.

Βy employing abstract, organic figures, merz creates familiar portraits and sculptures which insist on subjectiveness while emitting both a constantly changing message as well as the artist’s belief that every shape is fluid and should be able to transform into any other shape.

Μerz does not distinguish between art and life, employing handcraft and unconventional materials in order to explore the infinite possibilities of everyday life while in many cases she adopts traditional techniques associated with the female domestic environment such as knitting. the idea of home acting as a sphere engulfing privacy, familiarity and female concepts is one of the central references to her work.

Μoreover, in her works, the image of the face emerges as a symbol of the eternal human spirit. these faces are characterized by fleeting lines and abstract forms. merz’s figures defy the expressions of individual identity and resemble ghosts while seeming as they are detached from any kind of social or narrative framework as if floating for ever through time.

Τhe exhibition hosted at bernier/eliades will include paintings, sculptures and works on paper which emphasise merz’s pioneering role both in the arte povera movement as well as in the broader modern art community.

Ηer works have been included in this year’s venice biennale, where marisa merz was awarded the golden lion for lifetime achievement.

With the opportunity of marisa merz exhibition, the museum of cycladic art with the collaboration of bernier/eliades gallery will host a lecture the famous art historian, critic, curator and founder of arte povera germano celant on friday, october 11th at 18:30.

you can find more information on Marisa Merz at:
http://fondazionemerz.org/en/biografie/marisa-merz/