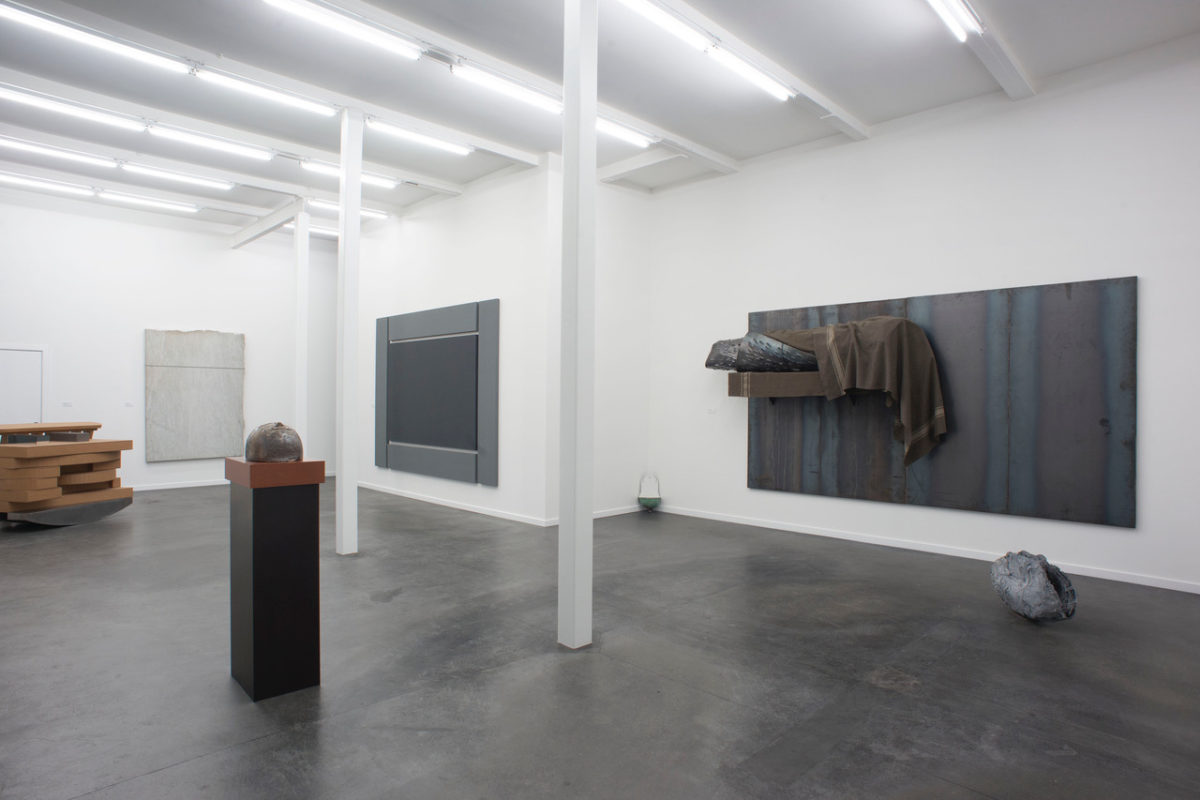 The exhibition “Mineral – Vegetal”, hosted by the Bernier/Eliades Gallery gathers together a diverse body of works comprised and expressive of these elemental components of our world. These works open through our experiences of rocks, metals, branches, flowers, and roots toward a compositeawarenessofourselvesasbodiesinaworldofbodiesofdifferentkindsandmaterials. Sensations of weight and lightness, stillness and motion, silence and sound stir up from the bringing together of theseforms.

Webeginbyconsideringhowthemineralspeakstousoftheweightofbodiesandthings. In Verde Argento, the immense weight of the block of stone suspended by a simple knot dramatizes Giovanni Anselmo’s play with the earthly, severe presence of material and the slim, strategic tether by which it may be made to appear buoyant. As an act of balance and gravity, thispieceperpetuallydefersanimminentcrash.Magic,determination,andaresourcefulwitcome together in this pithy, enigmatic composition. It instrumentalizes, as aphorisms or parables do, summationsofhumaneffortmatchedandjoinedtotheindifferent,magnificentworldofstone.

Anothergroupofworksforegroundsthepresenceofthemineralinitshistoricalandsocial manifestations. An untitled work of a military blanket and iron, arranged by Jannis Kounellis in 2012, engages with the influence of metal explicitly through the practice of Arte Povera, by choosing materials with little economic significance that nonetheless hold immense historical, political,andaffectivevalues.Thisselectionmodelsthevitalregardartistsandappreciatorsofart maypossessfornarrativesthatcontrasttoarbitraryconsumerism.Thedrapedandfastenedcloth of the blanket on this metal structure evokes violence, oppression, and despair. The layering of these textures—the relative softness of the blanket against the metal as it falls, powerless and exhausted as a body—draws us by corporeal similitude into a concentrated awareness of the darkironframe.Wemayencounterheretheshudderthendeadstillnessofforce,theabsenceof anybreathingsensationofwarmth,andthenearlypetrifieddoominitiatedbythosedeniedchoice under the auspices of poverty and war. There is no promise for redemption here, no claim to the bought glories of power; there is, in fact, a material cry to the contrary. We are left to reflect on thevehementstructuresimposedonus,aswellasonthenaturalresourceswithwhichwefound ourliving.

Theworksintheexhibitcomprisedanddemonstrativeofthevegetalguideustoadifferent consideration—that of the lightness of bodies and things. Michael Buthe’s Four Seasons, 1990, blends and arranges petals, twigs, and other natural ephemerae—applied and painted when fresh—nowbrittle,thinned,papery.Whitefeathersanimatethecircularmotionofthepiece.Each compositionalgesturerisingfromthepairingofpigmentandnaturalartefactservesasatalisman for the passage of a delicate but relentless strain of time: the time of all that lives. The colors of the four seasons rotate and blur at their borders. Without losing their own characters, these fragmentsgivedepthtothesuggestedmovementthroughseasonsinalandscape.

Thesearenottheseasonsofholidaysandinvestments,orthearbitrarycyclesofexpectedsocial phases; these seasons of the vegetable are that of matter coming into form, blossoming, and undergoingtheprocessofweathering—withtheirowncomplexaffinities,theirowndynamicsand special inevitabilities. Although we are brought in a different way from our encounters with the mineral, we are returned through this other representation of time to a similar experience: that which unfolds with rhythms greater than those of our own design. These effusive swarms of collected, layered fragments are contrasted by the silence and stillness in other works of the exhibit that depict and draw from the vegetal world. A glazed ceramic by Schütte (Blumenoval, 2014), for example, suggests surrender to the extension of white space around its slight articulations.Blumenovalispaintedminimallywithcontrastinglightanddarkbranchinglinesthat seem to echo and trace each other across its surface. We are reminded of a non-egotisticalway ofbeingandexpressingthatbearsitssmallandbriefyetsomehowsurewayacrossanunmarked expanse, surrounded by avoid.

Branching structures, in other works, create a stylized vision through which the vegetal dimension of our environment constitutes an introspective path of sensory indulgence. Clusters, 2008, by Gilbert and George, is a strong model. The symmetry of mirrored branches is grafted over by a geometric grid: an entranced study of extension and penetration through formal constraints. At the four corners of the image, four icons appear, as if phases of a single entity,or the informative keys to a map. The final icon (if followed clockwise) on the bottom left, which resemblesbutterfliedsidesofanass,diagrammaticallyanticipatesthecentralshapeofthepiece: a simple diamond with an x marking its center. These icons encourage an approach to the otherwiseabstractimagethatisgraphicinboththeillustrativeanderoticsense.Likemanyofthe works in the Jack Freak Pictures Series, Clusters is easily read on its surface while warranting several close returns for further discovery. There is an aggressive playfulness in the crossing and closing of lines, as well as in the directed hold on the viewer’s gaze. The lightness of such a visual interaction, combined with the pattern that structures it, lends itself easily to the furthest reaches of the fantastic—Impressing as an image from dream might on that tender and wildpart of our bodies that hosts our fears anddesires.

When given the chance to be with such diverse styles of engaging with the vegetal and mineral, we may be drawn to some and challenged by others. The mineral brings us to a reeling instant of recognition: our position in geological time, which initiates terror and outrage in some, reliefandhumilityinothers.Thatminerallayerofourworld,initsfoundational,cosmic,andartistic manifestations, prompts a flaring up and perhaps also an eventual quieting of our passionate commitments to all things mortal. The vegetal, on the other hand, evokes from us a different knowledge of time—the time of rooting and growth, flowering, fruiting, dispersal of seed: the colorful time of generation and dissolution in light. We emerge from a choral encounter with art of the vegetal and mineral refreshed, having stretched through them into the severaldimensions of feltexperience.