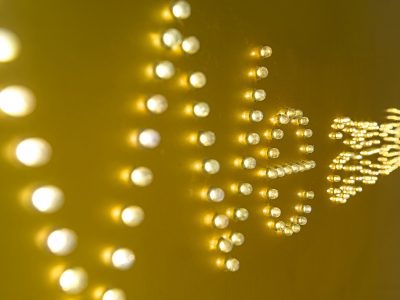 In his new series entitled “When you Sing”, Navridis keeps working inspired by the dramatic and literary oeuvre of Samuel Beckett, selecting quotations from the writer’s texts, that behave in an autonomous and independent way.

The pieces, large golden coated surfaces, act as a substratum where the luminous phrases of the texts are projected emphasizing the equivocal significance of gold which nowadays acquires an apropos dimension
….. Beckett’s phrases cut out as haiku or “haiku fragments”, timeless and intercultural, reflect that which has occurred and this which is now occurring, they capture the moment and preserve it eternally; they might not speak about everything, but at least they comprehend it all. They face the gravest matters with the most unadorned and marginal sense of humor and the most hilarious situations with an aristocratic graveness. These phrases cut off from the text, become “difficult consolation commands”, “instructions of stage escape”, “balance exercises” they become in the end an ensemble of words where each sound, motion, rhythm, breath and silence join in absolute union.
These golden coated surfaces of “When you Sing” are in reality the slightest, scaled detail of an enormous fragment. An over-enlarged surface which holds together the broken parts glued amongst them with gold like the Japanese Kintsugi. (*1) A part of the enormous jig-saw puzzle that overwhelms us all.

In “Aeschylia Festival 2013” at Eleusis, Beckett’s phrase “…fail again, fail better” illuminated with led lights the outdoor plot of an old olive mill, covered in ears of wheat. The work was a metaphor connecting the difficult historic past of Eleusis and the economic crisis of 2013 with Beckett’s word that understood every failure and kept trying mindless of the result.

In “When you Sing” the golden ear is transformed into golden leaves and expands beyond the Thriassion Field. The surfaces are illuminated, the gold reflects the words, the text-light is diffused into the environment and returns back through its viewers.
These golden surfaces with Beckett’s words are doors that lead nowhere. They are bricked doorways offering no escape. Speaking of an external threat deriving from within that leads deeply back.

(*1) Since the 15th century Japanese use the Kintsugi method to repair broken ceramic objects, covering with a thin golden dust the glue’s surface, emphasizing rather than covering the damage. Through Kintsugi, the broken or old ceramic vessels are displaying their imperfections and history, and enhance the scars inflicted through use and life experience.