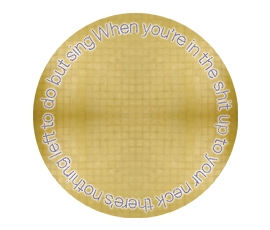 The Bernier/Eliades Gallery is pleased to present the new solo exhibition of the Greek artist Nikos Navridis entitled “When you sing”.

This new series of works is based on his previous installation “Fail again Fail better” which he showed in Eleusis at the Aeschyleia Festival in 2013.

At that time, he transported spikes of wheat from the Thriasio field, the ancient wheatgrass of Eleusis, a source of food and life for all the ancient Athens which covered the plot of an old olive mill.  The new real-non real grain enlightened the phrase of S. Beckett: “Ever tried, ever failed, no matter.Try again, fail again, fail better.”

This specific work is a metaphor. The ancient wheat covers and give back to life the barren yard of the factory along with Beckett’s generous phrase that reconciles us with our failure and mistakes.

These works with their gold and silver surfaces as well as fragments of Beckett’s quotes, refer to this first installation and has a symbolic character. The golden wheat in these works become gold leaf based on the ancient healing and therapeutic character of gold, they cover the scars of a surface that suffers.

At the same time Beckett’s phrases have a consoling character that encourages us to get along with our mistakes, weaknesses and imperfections. These works are illuminated – the gold absorbs and reflects the surrounding light by integrating it.