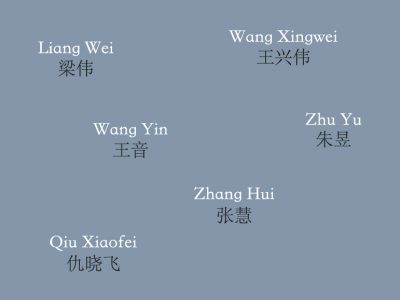 Bernier-Eliades gallery is pleased to present the exhibition of “Other Flows: Six Contemporary Chinese Painters” on the Thursday, April 10th. The show is curated by Colin Chinnery.

Contemporary chinese art and especially painting, has come to the attention of the world often through headline grabbing auction results rather than content. This has had the unfortunate result of creating an artificial separation between painting, which is seen as being commercial and more contemporary media such as installation and video, which are seen as being more experimental. While there are painting ‘schools’ and styles that exert a great deal of critical and commercial influence in China, there are painters who remain fiercely independent of these factors and have because of this attitude developed complex and unique bodies of work that engages ideas of contemporaneity, of identity, of history and ideology that is often hard to find in the aforementioned more experimental media. It is this independent outlook and creative attitude that have brought this group of artists together for this exhibition – the first show of its kind in Europe.

Liang Wei (born 1966, China) creates paintings that hover on the edge of chaos, retaining their coherence through the effort and participation of the viewer. The fine line between chaos and order here reflects the blurred boundary that separates a harsh external reality with our more delicate interior selves. In her works, images are dissected and rearranged until their lines and colours bleed into each other to form new pictorial meaning, evoking both violence and contemplation.

Qiu Xiaofei (born 1977, China) combines painting with sculptural elements to create hybrid objects. Originally part of the N12 artist group active in the early 2000s, Qiu established an oeuvre of paintings and sculptures depicting nostalgic images and objects of his childhood. Since then he has radically shifted the subject matter and physical quality of his work to create almost surreal compositions that create subtle and humorous visual dialogue between the painting and physical objects contained in each piece.

For the past twenty years, Wang Xingwei (born 1969, China) has constructed a whole universe of visual associations that seems to know no boundaries but remains remarkably self-contained. Instead of developing a personal painting style, Wang paints each work in a style suited to its subject matter. Art history, humour, himself, kitsch, local culture, popular culture, nostalgia, and a host of regular characters and animals populate his works, constantly reappearing and rematerializing in different combinations and permutations, creating meaning exhaustively, excitingly, exasperatingly.

Wang Yin (born 1964, China) has established a reputation as being one of China’s foremost intellectual artists. Painting for Wang Yin is very much a vehicle for his long term research into issues of history and ideology and central to this process is his strong affinity with chinese art history, especially the modern history of chinese oil painting. The cultural and ideological tension in Wang’s canvases don’t spring from his compositions per se, but from their apparent lack of contemporaneity. Their intricately subdued tones and ostensibly quiet subject matter convey issues at the very heart of -but often hidden by- contemporary life.

Zhang Hui (born 1967, China) has for some years now worked from black canvases, painting layer upon layer of thin acrylic paint to slowly bring images into being. This process allows depicted objects to exude a physicality that doesn’t rely on thick paint. Because of Zhang’s awareness of how our reality has been constructed out of ideological intervention, he paints objects and people that seem to exist despite of reality, striving to attain a poetry that may liberate them from the mundane.

Zhu Yu (born 1970, China) is a painter who approaches his work from a conceptual perspective. He is interested in the act of being a painter more than the act of painting itself. Deliberately avoiding the aesthetics of all known styles of contemporary painting, he examines two fundamental issues – what it means to be chinese working in a western medium and what does seeing mean today. His meticulously painted photorealist canvases of pebbles and tea stains left at the bottom of porcelain cups create an aesthetic that is both beautiful and defiantly hard to categorize.