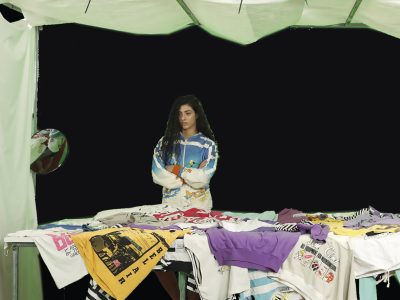 Bernier-Eliades gallery is pleased to present Incorporeal Bundles, the first solo exhibition with the gallery of Greek artist Rallou Panagiotou, opening on Wednesday March 29th. Rallou Panagiotou creates sculptural topologies with composite materiality and formal conciseness. Assembled from highly mediated fragments of built environments, anatomised commodities and traces of gestures, her work collapses distinctions between different orders of objects and technologies via a currency of emotions. In Incorporeal Bundles, she furthers these topological anatomies on specific architectural features and quotidian objects whose value and potentiality is stored up in their inalienable properties. Their non-transferability due to attachment to the body, to history, to traces of action or leisure makes them mute to market exchange. Incorporeal Bundles is an elegy on objects complicated economically.

Panagiotou subjects the properties of her selected fragments to a material distillation, making them solid anew with the use of classical sculptural methods in marble and in metal as well as with new technologies, reinstating each one as keimêlion, ‘something to be laid away or treasured up’. In her reading of contemporary material fragments as symbolic treasures, she excavates the historical and genealogical properties of these fragments exploring the connections, differentials and tensions of temporally and geographically different settings. She mirrors them in a lineage of object-hood, poetics and exchange which spans from the ‘chiaroscuro’ of the Homeric times to the upheavals of the Medieval, to the grit of 1980’s. Rallou Panagiotou sets the tone for this currency of emotion with a film, Two-hander (2017), the darker sub-sequence to Kalypso Volume II (2016). The Dealer, the Client locked in the law of repetition, the law of the series. Transactions are negotiated, desires are fabricated, roles are reversed. In a staged marketplace, a polyphony of one exists in a scene of eternally potential exchange.