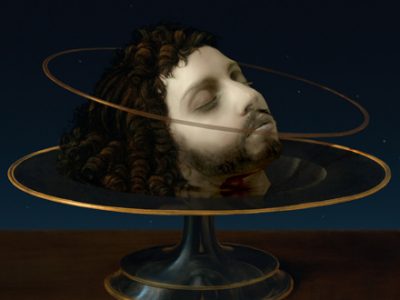 The Bernier-Eliades Gallery is pleased to present the show of Robert Wilson: Video Portraits of Lady Gaga. This is the second solo exhibition made by the artist in the gallery. The Gaga portraits, were shot in October 2013 in London and premiered in November 2013 in the Louvre, as part of the exhibition Living Rooms, by Robert Wilson. This show was the product of a unique collaboration between the Louvre, Robert Wilson and Lady Gaga.

The American artist, choreographer, director and perfomer Robert Wilson created a series of video portraits of Lady Gaga, influenced by three classic works belonging to the permanent collection of the Louvre museum: Mademoiselle Caroline Rivière, byJean-Auguste Dominique Ingres (1806) The death of Marat, by Jacques Louis David (1793) and The head of Saint John the, by Andrea Solari (1507). The fourth portrait called Flying, does not derive from the museum’s collection. It is a contemporary work, with references from the ancient Japanese rope bondage Shibari.

In this exhibition, the face and the body of Lady Gaga are transformed into the characteristics of Mademoiselle Rivière, a video inspired by the famous portrait of Ingres. Wilson also gives us a variation in eleven steps, based on the work of Andrea Solari’s “The head of John the Baptist” (1507), in which the model of the 16th century and the transformed face of the pop star merge in and out of each other.

Apart from these paintings, in the show will be included a video for the making- of of the two artists’ joint production. Robert Wilson and Lady Gaga are seen in action during the shooting if the video Flying. Robert Wilson dictates every movement. His art finds its highest fulfillment in the sheer power and determination of Lady Gaga. “She is capable of changing character at an alarming speed,” says Wilson.

Robert Wilson was born in Wako, Texas. He studied at the University of Texas and the Pratt Institute in New York. In 1960 was recognized as one of the leading avant-garde scene in Manhattan. With the production company Byrd Hoffman School of Byrds, created Deafman Glance (1970) and the 1976 opera Einstein on the Beach with music by Philip Glass, with which he became known and changed stereotypes of opera.

Since then, Robert Wilson has organized two original works and works from the traditional repertoire, including: The CIVIL warS (1983-1985), Salome at la Scala, Milan (1987), Black Rider atThéâtre du Châtelet (1990), Orlando with Isabelle Huppert at the Théâtre de l’Odéon (1993), the Ring of Wagner at the Zurich opera (2002), Lulu of Frank Wedekind with music by Lou Reed at the Théâtre de la Ville (2011), The Life and Death of Marina Abramovic, in Manchester (2011) and Madrid’s Teatro Real (2012. In November 2013, presented the Old Woman with Daniils Kharms, with Willem Dafoe and Mikhail Barynchnikov at the Théâtre de la Ville and in December, at the same place, Peter Pan with the Berliner Ensemble and music by CocoRosie. In January 2014 showed the Einstein on the Beach, at the Théâtre du Châtelet.