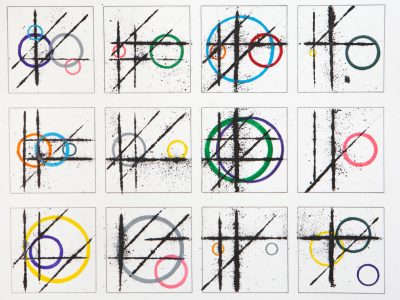 The Bernier/Eliades Gallery is pleased to announce the solo exhibition “Videos and Drawings” by Robert Wilson.

On his occassion, Robert Wilson will show new and recent drawings about his latest theatre production combined with video portraits. The triptych of video portraits entitled “A Winter Fable” is a story told by a wolf, a fox, and a lamb with a score that is composed of music by Coco Rosie, and readings of the original fable by Italo Calvino’s daughter Giovanna Calvino and her friend Isabella Rossellini.

Born in Waco, Texas, Wilson is among the world’s foremost theater and visual artists. His works for the stage unconventionally integrate a wide variety of artistic media, including dance, movement, lighting, sculpture, music and text.  His images are aesthetically striking and emotionally charged, and his productions have earned the acclaim of audiences and critics worldwide.

Wilson’s drawings, paintings and sculptures have been presented around the world in hundreds of solo and group showings, and his works are held in private collections and museums throughout the world.

After being educated at the University of Texas and Brooklyn’s Pratt Institute, Wilson founded the New York-based performance collective “The Byrd Hoffman School of Byrds” in the mid-1960s, and developed his first signature works, including Deafman Glance (1970) and A Letter for Queen Victoria (1974-1975).

Wilson has been honored with numerous awards for excellence, including a Pulitzer Prize nomination, two Premio Ubu awards, the Golden Lion of the Venice Biennale, and an Olivier Award. He was elected to the American Academy of Arts and Letters, as well as the German Academy of the Arts, and holds 8 Honorary Doctorate degrees.