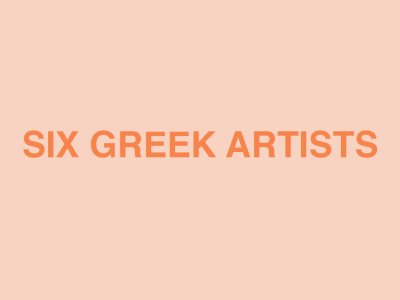 Bernier-Eliades Gallery is pleased to present “Six Greek Artists”, a group exhibition featuring works across the mediums of photography, drawing and sculpture.

Acting as a small resource on the country’s art scene, this group show aims to portray the unfolding dynamism of Greek contemporary art.

The three narrative photographs of Stratos Kalafatis (b.1966) are parts of short stories, with seemingly different destinations. The artist uses the square format and a palette of saturated colors imposing seductively the flash even during daylight.

Dionisis Kavallieratos’ (b.1979) flexible artistic practice includes small and large-scale sculptures in wood, clay or mixed media and drawings in pencil and charcoal. His sculpture and the two drawings reveal the artist’s dazzling inner world -a personal universe through a humorous and ironic style.

Nikos Navridis (b. 1958) uses a wide range of media: video, photography, drawing and installation. His color print “Difficult Breaths # 6” belongs to an earlier series of works, exploring the natural function of breathing and the element of air, while the wall piece “Obsolescence”, belonging to his later series, is inspired by the dramatic and literary oeuvre of Samuel Beckett.

The sculptures of Rallou Panagiotou (b.1978) have a composite materiality and formal conciseness. In this show, the artist features three sculptures assembled from highly mediated fragments of built environments, anatomized commodities and traces of gestures.

The artistic process of the young sculptor Kostas Sahpazis (b.1977) is strongly based in the predominantly plastic techniques. In this show the artist features an aluminum sculpture, placed on the gallery floor, that functions as a complete organism which interacts with the viewer and placing him into a process of observation.

Christiana Soulou’s (b.1961) drawings are characterized by sensitivity and an almost academic rigor, commenting upon the human condition. Her two drawings inspired by Jorge Luis Borges’ “The Book of Imaginary Beings” were shown at the 55th Venice Biennial, while the other two drawings are explorations of the form, inspired from Paul Valéry’s “Soul and Dance” and in the spirit of figure as described by Roland Barthes.