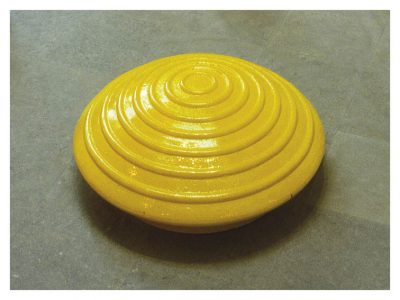 Thomas Schütte, one of the most important German artists working in the late 20th century, was born in 1954 in Germany. He studied at Düsseldorf where he lives and works today.
Schütte deploys a range of materials, techniques and forms which makes his work versatile and very diversive. It is not easy to summarize the artist’s evolution: A characteristic of his thirty-year career is that his work is developing in many, different individual fields: architectural models, installations, watercolours, banners, sculptures in different scales, etchings are some of the expressive modes deployed by the artist over the last years. The artist  creates a «repertoire», a personal collection of techniques and forms, from which he draws material each time. Different kinds of work are presented, so that the differentiation between individual fields assumes great importance. Schütte believes that form, material and colour have their own language, impossible to be translated.

The nature of Thomas Schütte’s work is hybrid and contradictory as it raises questions regarding its own internal logic. Subject-wise, the basic axis of his work is the human condition, with strong socio-political references: the artist re-examines the main aspects of everyday life while he explores at the same time the fundamental questions regarding the condition and the status of the artist and the artwork, today. A few of the issues that concern the artist and are subjects of his work are the problems that contemporary man faces- with oneself; living with others; confronting the present; facing his mortality. Schütte’s work is often ironic and critical at the same time.
Schütte has recently had solo exhibitions at Fondation Beyeler, Riehen, Switzerland (2013-2014), Museum Folkwang, Essen, Germany (2013), and Serpentine Gallery, London (2012), and his work has been the focus of three different recent retrospectives held in Bonn (2010), Madrid (2010), and Munich (2009). His work is included in the permanent collections of major international museums including: Centre Georges Pompidou, Paris; Reina Sofia, Madrid; Tate, London; Dallas Museum of Art; Art Institute of Chicago; San Francisco Museum of Modern Art; and Museum of Modern Art, New York. Thomas Schütte was born in 1954 in Oldenburg, Germany; he lives and works in Düsseldorf