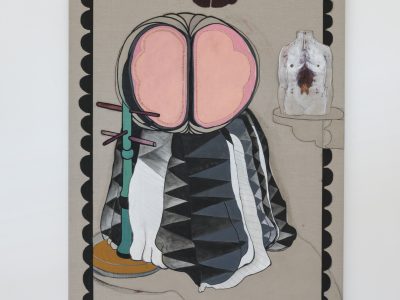 A sculptor as much as a painter, Valérie Mannaerts makes works in a personal language characterized by fascinations with the real and surreal. In her oeuvre, she unites the strength of drawing and sculpting, and moves between the second and third dimension. She sees the autonomy of the work as essential, and her unmistakable hand as the author is always recognizable. In her installations, she often composes peculiar yet familiar stages, which nonetheless insinuate spaces to appropriate, or to live in. Some recognizable, practical objects such as stools, pedestals and curtains are combined with evocative, dreamy drawings or paintings, sometimes also integrating collages of everyday images. The spectator’s senses are awakened by the highly individual, fascinating world she opens through her work.

Keeping drawings and sculptures at the center of her work, Mannaerts explores different materials, ranging from traditional clay to modern concrete, from bronze to laminate, from paper to curtain, from pencil to yarn. (fragment from a text by Asli Cicek for Maniera, Brussels). In her show at the Bernier/Eliades Gallery in Brussels, the artist will be presenting a complete set of new works. A series of large-scale paintings immerse us into a space where voluptuous beings are put on display. Each one of them reveals a different aspect of the same space. These spaces have a simple perspective set-up that give room to very physical entities who oscillate between objects and living beings. The new work is digging further into the artist interest in being specific about what the work wants to be and enabling it within its own logic. All the forms that are represented in the drawings are strongly embedded into Valérie Mannaerts’ language and are defined anew within this fresh body of work.