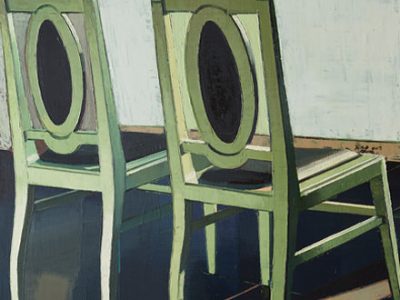 Bernier/Eliades Athens is proud to present the first solo exhibition of Chinese artist Zhang Yexing in Europe. As a major figure in post-80th generation artists in China, Zhang Yexing (b. 1981) graduated from Central Academy of Fine Arts in Beijing, and now works and lives in Bejing.

Born in an industrial city in northeast China near Russia, Zhang Yexing’s technique got lots of influence from Soviet Union and east Europe. His canvas is always heavily painted, scrubbed, and re-covered with layers of oil and pigments. Simplicity, roughness and profundity co-exist in a dynamic and harmonious way on the surface.

The new series are mainly objects in the artist’s studio, but in a dreamy and mysterious setup. The plaster sculptures on a table looking at each other, an open door standing on a coach, an empty bed in a dark room with the man lying on floor, a Chinese screen standing on a wasteland. Like screenshots out of Wang Kar-wei films, the pictures are hunted by loneliness and nostalgia. Like the artist himself explained, “My works are combined with time, space, props and narration. Moments make me excited and give me fantasies, in which the real world becomes unreal and far away.”